If you are in a hurry and just want to find out what the winner is, then we recommend the Dyna-Glo DGE Series (4-Burner) as the best one. Dyna-Glo offers more bang for your buck.

As a grilling enthusiast, I’m always curious about how certain top-name products hold up to the competition. That’s what got me wondering: Which grill would win in a Dyna Glo vs Char Broil matchup? To find out the answer, I conducted an in-depth investigation, pitting two of their most similar models against one another in a side-by-side comparison.

In this article, we’re going to compare the following gas grills:

Things To Consider Before Buying a Gas Grill

If you enjoy cooking outdoors, a gas grill can be a great investment. Not only are these units convenient, versatile, and efficient, it’s generally easy to find one at an affordable price. Their flames can be fired up at the touch of a button, and easily controlled throughout the cooking process—two of the most frequent complaints that people have regarding charcoal-burning units.

Of course, some people just can’t do without the smoky flavor and ritualistic nature of a charcoal fire. I understand this impulse—I still cook with charcoal myself when I have the time. These die-hard individuals would probably be better off researching the different types of charcoal grills and sticking with what they prefer.

When shopping for a gas grill, there are a few important factors to look for:

Dyna Glo’s four-burner unit is designed for people with larger outdoor cooking areas who need a great deal of grilling space. It features 646 square inches of cooking space–a number that’s more commonly seen on five-burner and six-burner grills–and a total heat output of 52,000 BTUs (British thermal units), with a gauge that helps you maintain the proper temperature and a set of stainless-steel heat tents. Note that you’ll need to buy the propane tank separately.

The Char-Broil Performance features a stainless steel lid, control panel, and handle that stays cool even when the grill is doing its work. Like the Dyna Glo DGE, it offers a removable grease pan and warming rack, but the cooking surface is considerably smaller, at just 475 square inches (though to be fair, there is a side burner that offers an additional 175 square inches). The heat output is advertised at 46,000 BTUs, with 10,000 of those coming from the side burner.

How well does the Dyna Glo DGE Series four-burner unit hold up to the criteria we introduced earlier? Here’s a step-by-step list to help you decide.

The Dyna Glo unit is reasonably priced for a four-burner unit, especially one that features so many stainless steel components. That said, it generally costs more than the Char-Broil Performance. If cost is a primary factor in your decision, then you might want to consider the Char-Broil instead.

Here’s where Dyna Glo earns some major points—if you’re looking for a lot of grilling space, that is. The cooking surface measures 646 square inches in total, which would be difficult for even the most enthusiastic griller to find fault with. The downside? The grill has a huge, bulky footprint, with side tables that aren’t capable of folding down the way they do on some comparable units. This grill should be considered only if you have a large patio or outdoor kitchen that can accommodate a unit of this size.

I’ve found the electric ignition on this model to be especially reliable, with the four burners heating to optimal temperatures in very little time. Speaking of optimal temperatures, the Dyna Glo is capable of reaching up to 550 degrees Fahrenheit, making it a good choice for grilling pizza or other flatbreads. The temperature gauge is reliable, and the stainless steel heat tents help protect the burners from grease and other debris, thereby ensuring that they’ll burn longer and more efficiently.

As mentioned above, the heat shields are a welcome and effective addition. The cooking grates and warming rack are constructed of stainless steel as well, so they’re built to last. I’ve noticed that some secondary components, such as the removable grease pan, are prone to rusting; it might be a good idea to keep it stored separately when the grill is not in use. If the unit is well maintained, it should serve you well for a decade or more.

Putting together the Dyna Glo DGE four-burner grill takes one to two hours on average, depending on how much practice you’ve had. Personally, I didn’t experience any issues, but based on customer reports I’ve read, it’s best to make sure all the components have arrived in good condition before attempting to assemble the grill.

The stainless steel construction makes cleanup fairly easy, but only if it’s performed soon after each use. The longer debris is allowed to cling to the cooking grates, the harder it is to remove—and the more likely it will be to cause damage from rust and corrosion. Fortunately, the parts are easy to remove, so there’s no excuse to let them sit for long once they’ve cooled down enough to handle.

The heat tents are a welcome benefit, as is the electric ignition and temperature gauge (though the last two are likely to be found on most four-burner gas grills). Aside from these, the Dyna Glo doesn’t have much to offer in the frills department—it’s just a standard gas grill, albeit one with a great deal of space.

To get a definitive answer in the Dyna Glo vs Char-Broil debate, we have to give the Performance 475 the same treatment as its DGE Series counterpart. Read on to find out how they compare.

As four-burner gas grills go, the Performance 475 represents a real bargain. It’s priced far lower than other major competitors. Those looking for a large grill at a budget price should put this unit on the shortlist.

This model features 475 square inches of grilling space, with a swing-away porcelain rack offering an additional 175 square inches. While this is sufficient for a four-burner grill, it’s not particularly generous; the Dyna Glo wins the round in this regard. To be fair, though, the open cart style on the Char-Broil gives it a more streamlined appearance, and it won’t take up as much room on the patio.

Like the Dyna Glo, the Performance 475 has a reliable electric ignition that starts the burners at the touch of a button. It doesn’t heat up as quickly, though, and the maximum temperature isn’t quite as high. There’s also a gap near the front of the lid that causes too much heat to escape during cooking. If you’re looking for a grill that will give your red meat a good sear (and do so consistently), this might not be the best choice.

The Char-Broil loses a few points in this category. While the body of the grill is built to last, many of the secondary components (such as the wheels and gas regulator) require frequent replacement. Fortunately, the customer service department provides friendly and reliable service, but it would be nice if they weren’t needed quite so often.

This model is easy to put together, provided all the parts are in place—a few key components were missing when my unit arrived. You can circumvent this issue by purchasing directly from the manufacturer, or at a brick-and-mortar establishment. Once you’re sure you have all the parts you need, the assembly process shouldn’t take more than an hour.

The porcelain-coated cast-iron racks on this grill make it even easier to clean than its Dyna Glo counterpart, and the removable grease pan adds to the convenience. Also, since there’s not as much grilling space on the Performance 475, the cleanup process will take that much less time.

Like the Dyna Glo, the Char-Broil unit offers side shelves (one that can be converted into a burner), electric push-start ignition, and a built-in temperature gauge. There are no real outstanding features to set it apart from the competition, though—shoppers who want a conversation piece as much as a cooking unit would probably do better to expand their search beyond these two choices.

On the Road with the Dyna-Glo DGE

To find out whether the Dyna Glo really works as well as the company advertises, I scoured the Internet for testimonials from other consumers. The affordability of the unit was mentioned at least once (despite the fact that it generally costs slightly more than its Char-Broil counterpart), and it received frequent compliments for its durability as well. One tester was especially impressed by how easy it was to assemble and how effective it was at searing meat once it was put together.

On the Road with the Char-Broil Performance 475

The research I did on the Char-Broil turned up more or less the same information: The fact that it’s a bargain purchase is a key aspect of the unit’s appeal. However, consumers were equally impressed with the heat distribution and retention (more so than I was), and found the grilling area to be more than sufficient.

Is there a clear winner in the Dyna Glo vs Char Broil matchup? It’s difficult to say; both have their strong points, and they tend to be weak in similar areas, which makes it that much harder to come to a strong conclusion. However, if pressed, I would say that the Dyna-Glo DGE Series offers more bang for your buck. The heat tents increase the durability while helping to cut back on overall maintenance, and it’s large enough to suit the needs of the most voracious griller. The only caveat I would add is that it takes up a lot of room, so you might want to consider the alternative if you don’t have that kind of space to devote to a grill. Otherwise, I can’t see you going wrong with this purchase.

I hope you’ve enjoyed learning more about these two giants in the grilling industry, and that your eventual purchase brings you many years of joy–not to mention a hearty supply of delicious results. Best of luck, and happy grilling! 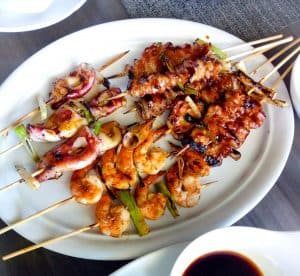 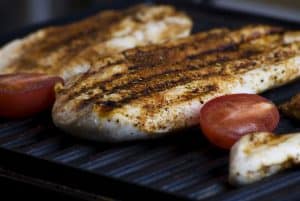